We are in unchartered territory as Carbon Dioxide levels have reached its highest point in recorded history, leaving us grappling with the problem that no other generation before us had to.
The World Meteorological Organization (WMO) published their yearly report this week on the concentration of all greenhouse gases in the atmosphere and found that the levels of Carbon Dioxide reached its pinnacle in 2018 since pre-industrial era, the highest measurement being 415.70 ppm.
Extrapolating this data, Yale’s Environment 360 reports that it could reach 500 ppm by 2050, which is a cause for concern. 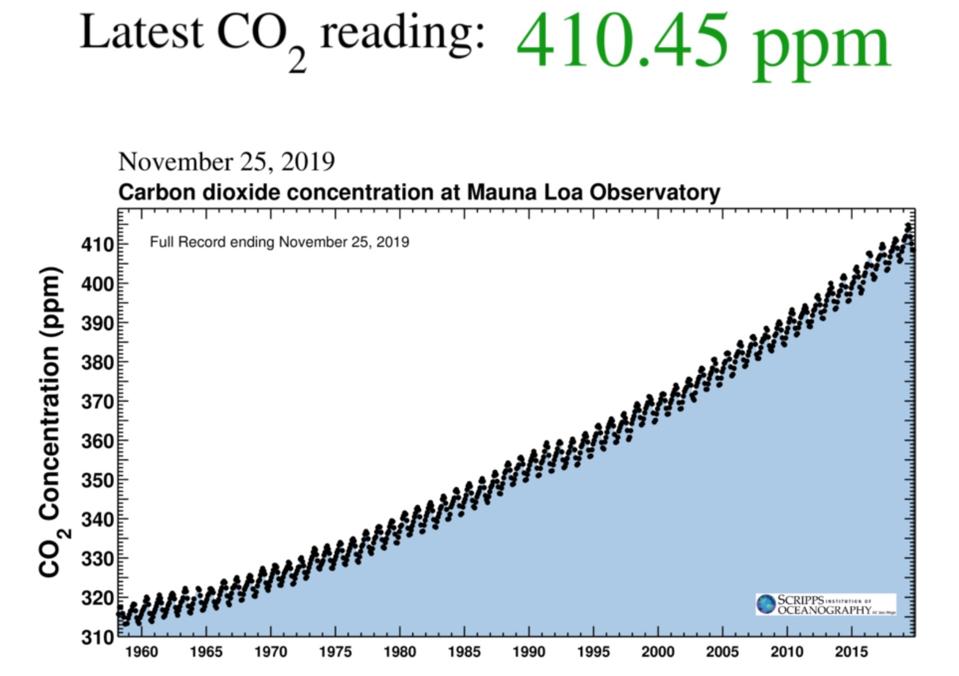 The Earth, over its 4.5 billion years of history, has definitely seen higher concentrations of CO2 by today’s standards, however the same climate scientists who discovered that that was the case in Earth’s history, warn us now of the potential dangers concomitant with the increase now.

They were able to retrodict the CO2 levels and found that it was as high as 4000 ppm 500 million years ago – a period called Cambrian where many complex multicellular lives evolved, and was as low as 180 ppm during the last “Ice age” on Earth, commonly referred to as the Quaternary period.
The next logical question that would arise based on these statistics is that why should we be solicitous about the current levels of CO2, if in fact Earth has seen even higher levels of CO2 in the past.

1. The levels of CO2 has risen faster in the last century than ever before in the entire history of the planet. The rate at which CO2 increased in the atmosphere due to natural processes proceeded at a snail’s pace compared to the rate at which it is accumulating now due to human activities.
2. We have built our world and economy around us based on the current state of climate and any adverse change will ineluctably lead to widespread cataclysm.

We as a species have come a long way since being tree dwellers and have become successful as we were able to contemplate the consequences of our actions but now, with nothing to guide us of what the consequences are going to be in the next few decades, scientists generally are a worried lot as they don’t like uncertainties, except for the one that Heisenberg introduced.

Scientists have been able to retrodict past climates and the rate of increase of CO2 in those corresponding eras by looking at ice cores, tree rings, ocean sediments, etc. however the current rate that we are seeing is unprecedented and we don’t have enough predictive power to ascertain what the future holds for us and how this can impact our planet.

Richard E. Zeebe from the University of Hawaii, in a paper published in Nature says this ambiguity represents a fundamental challenge in constraining future climate projections.
The other cardinal matter to be given due consideration is that we have built our society relying on a stable climate rather than a capricious one and our infrastructures, arable lands, energy systems are not designed to endure extreme changes in climate.

What if a region that had copious amounts of rainfall in the past is witnessing a drought of epic proportions? Would there be a mass exodus or do we engineer our environment? These are already happening.

What do we do if rising sea levels inundates entire cities that are located close to the coast? Do we build a bulwark to prevent that or do we abandon coastal cities and move into places that are high above the sea level? We are already witnessing these.

What do we do if mosquitoes are able to migrate further inland than they were able to do or if the permafrost releases some harmful strains of microbes into our atmosphere? What does that translate to when it comes to pathology or epidemiology? These are serious problems that need careful and detailed analysis and prudent action.

No wonder scientists are concerned about the present state of affairs. Global efforts in reducing CO2 emissions, a switch to an alternative source of energy for the growing human populace can definitely alleviate some of the concerns and be a step in the right direction however it’s left to be seen how we as a species will regroup and act as a whole to achieve a gestalt.