Scientists in Hungary have recently published a paper that posits the existence of a hitherto unknown particle, which as they say could provide an explanation for the elusive dark matter, something that accounts for nearly 80% the mass in the universe and also could reveal the existence of a “fifth force”, beyond the four fundamental forces that we already know – Gravity, electromagnetism, the strong and the weak nuclear force.

To find out the existence of new particles, scientists have been using atom smashers or particle accelerators which involves smashing together atoms or subatomic particles at high energies and looking at the debris as a result of the collision to glean information about new particles. This method yielded the first confirmation of the theorized Higgs bosons in CERN’s LHC (Large Hadron Collider).

Attila J. Krasznahorkay and his associates at ATOMKI (the Institute of Nuclear Research in Debrecen, Hungary) used a different method of detecting particles where they fired protons at the nuclei of Beryllium-8 and watched the electron-positron pair production when the Be atom transitioned from a high energy to a low energy state.

The results were quite surprising as the deflection of the electron-positron pair deviated from theory at an angle as though there was an intermediate particle which first got produced and later decayed into an electron and a positron which we subsequently observed.

This particle, dubbed X17, would have to be a boson, a force carrying particle, and would have a mass in the range 17 million electron volts.

Researchers have also observed some strange behavior in Helium-4 nuclei that can also be explicable by the presence of this X17 particle.

As opposed to the normal 5-sigma confidence level which is enough to report a finding as a discovery, this experiment enjoys a higher level of statistical significance, a 7-sigma level, meaning the probability of this result due to chance or random fluctuation is very minimal. 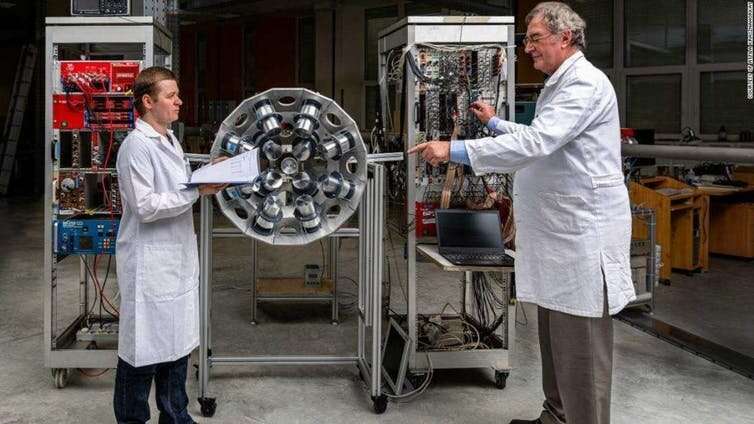 This new particle, which has a higher significance level than the Higgs boson, is viewed with askance by physicists as replicating the experiment with the same result is very unlikely as they were unable to get the same results for an experiment in 2004 which hinted at another elementary particle.

One also has to account for this new particle and how it fits with the experimental data from other experiments apart from the one that involved the Be and He experiments.

Scientists would still require independent confirmation of the experiment from another group.

Initially the group reported a weak signal for the existence of the boson and ever since upgrading the equipment and refining the sensitivity in the Be and the He experiments, they were able to achieve a result that’s quite statistically significant, which they presented at the HIAS 2019 symposium in Canberra, Australia.

How is this new particle connected to dark matter?

Dark matter interacts very weakly with normal or baryonic matter and we can only infer its existence due to its gravitational influence on distant stars and galaxies. So, how does this X17 fit in?

Physicists will now wait for an independent confirmation of the result by other groups across the particle physics community to confirm the existence of such a particle. If this bears fruition, the next target could potentially be the dark matter particles themselves.

Scientists create artificial flesh that can heal itself like real flesh