A new study from researchers at the Duke University has devised a bandage that can capture the pro-healing chemical at the location of the injury and consequently can accelerate the natural healing process of the bone, the results of which are to be published on December 12th in the journal Advanced Materials.

Studies in mice indicate that the bandage in tandem with the pro-healing molecule enable faster formation of callus and vascularization, which accelerates the healing by three weeks.

This could be applied to many medical products like such as biodegradable bandages, implant coatings and bone grafts for grave injuries.

Shyni Varghese, professor of biomedical engineering, mechanical engineering and materials science, and orthopedics, at the Duke University, while studying how materials made of calcium phosphate help bone repair and found that a molecule called adenosine plays a pivotal role in bone growth.

They found that the body naturally produces these adenosine molecules and sends them to the site of the injury to prep the body for the healing process, however, they don’t live long enough to perform their duties efficiently and Shyni envisaged that the healing can be accelerated provided the number of molecules at the location is maintained at high concentrations.

She also mentioned that these adenosine molecules perform a lot of other functions that are critical to the body, and to avoid any side effects, they have to find a way to localize these molecules around the injured area.

Shyni and another graduate student, Yuze Zeng, fashioned a bandage that contains boronate molecules that grab on to the adenosine molecules produced by the body and make it stick long enough around the damaged bone. Also, the chemical bond is weak enough that they sunder apart and this ensures that there is a slow release of these molecules into the affected area alone.

In their study, they also found that a porous biomaterial containing boronates were able to capture the adenosines efficiently.

What they noticed was that, at the end of a 3 week period, those mice that have been treated with both showed more progress and bone development than the ones with bandages that could not capture the adenosine molecules. 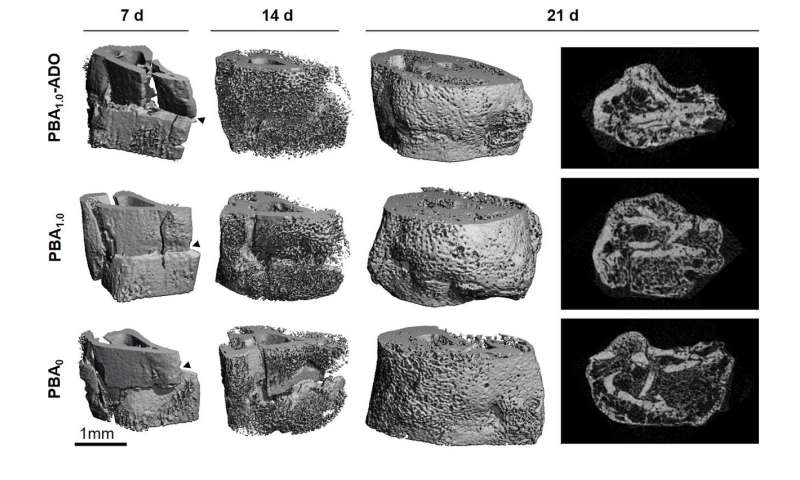 They were able to show that these bandages worked, whether through artificially laced adenosine molecules or by capturing the natural adenosines produced by the body.

Yuze emphatically says that normally patients with osteoporosis do not produce the amount of adenosines necessary for bone repair, however, their contraption would be able to capture them and accelerate the healing process.

Varghese and Yuze have envisaged many practical uses for their device in the field such as a bandage that decomposes and integrates into the body, or a gel laced with adenosine that can help prevent bone injuries.

Varghese has filed a patent for this device and its future applications and treatments, however, she has maintained that whether this will work in humans or could cause any side effects is yet to be discovered.

Ancient Fossils Prove Lining Up Is A Primal Urge

Essential oil poisoning is on the rise: What you need to know