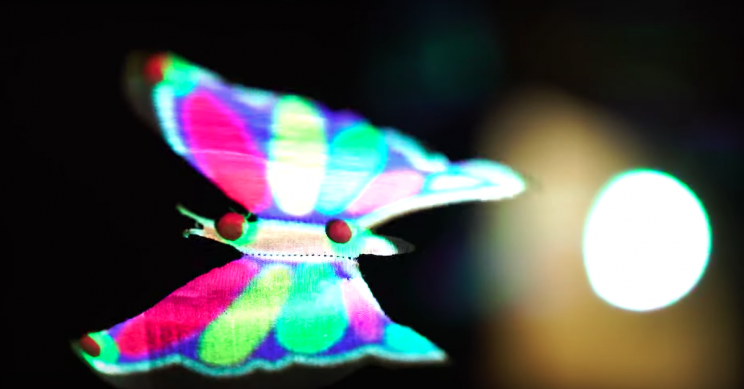 A hologram is a 3-D image of an object created by a technique for recording and then reconstructing the amplitude and phase distributions of a coherent wave disturbance. Examples of such holograms that we have come across in our lives including but not limited to human organs, circus animals and long-dead celebrities.

In our lives today, the modern advancement in technology have aided scientist in the creation of cutting-edge holograms that are not only possible to see but also hear as well as even feel. This concept was practically pulled off by scientists from the University of Sussex by the use of drawings on some vintage technology.

This team of scientists posted a paper on their gadget called Multimodal Acoustic Trap Display (MATD). The gadget functions utilizing ultrasound waves to hold and shift a 2 mm thick polystyrene bead around midair. The role of the bead is to trace out the shape of a given object in 3-D while LEDs shine red, green and blue light on it.

The human eye is capable of only seeing the completed shape since the bead moves at extremely high speeds. This phenomenon can be related to the conventional illusion of the way a speeding series of still frames look like a moving image. This tech is founded on the concept of old Television sets which used one colour beam scanning along with the screen at high speeds making the brain register it as one image.

Scientist Ryuji Hirayama claimed that the new technology prototype incorporates a similar concept using a coloured particle that can move so rapidly in any given direction in three-dimensional space, causing the typical human eye to only see a volumetric image in mid-air. Adding ultrasound waves allows the gadget to create audible noise as well as a physical sensation.

Ultrasound carries energy through the air since it is a mechanical wave, although it’s not audible enough for us to hear. According to scientist Diego Martinez Plasencia, the new tech prototype focuses and directs the respective energy which can potentially be audible enough to hear or feel on our skin. This team of scientists aims at producing more of these devices which incorporate multiple beads to produce better-detailed holograms.

Moreover, the transition of this new tech prototype to reach consumer products is anticipated not to be a big challenge since, unlike most of the cutting-edge techs, this one is easier to work with and manipulate. Also, it’s possible to improve its capacity and power considering it was developed using readily available components at low prices.

Government Plan Says Drilling Could Cause Extinctions in Alaskan Refuge

MN Public School Board Chairwoman: Evolution Is Outdated Because ‘It Was Discovered In The 1800s’

Angry People Think They’re Smarter Than They Actually Are