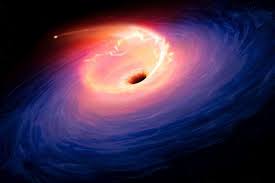 A very unusual black hole exists some 7,800 light-years away, in the constellation of Cygnus. This black hole is known as V404 Cygni. In the year 2015, telescopes around the globe gazed in bewilderment as it became active to gobble materials from a nearby star in one-week time.

Following the occurrence of this phenomenon, astronomers have been analyzing the particulars that contributed to this event in a bid to gather as much information as possible. A discovery concerning this has been made as jets wobble with near the speed of light making it possible to see their change in direction in mere minutes. Resulting in the ejection of high-speed clouds of plasma.

According to James Miller-Jones, an astrophysicist of ICRAR at Curtin University in Australia, this black hole system is the most peculiar he has ever come across. By definition V404 Cygni is a binary microquasar structure which contains a black hole around 10X the mass of the sun and a related star with a lighter red mass somewhat smaller than the sun.

Consequently, as time passes by the black hole is gobbling the red mass while the materials were drawn away from the respective star start to orbit around the black hole in an accretion disc format. The reduction in the distance moving closer to the dense regions, heat increases significantly since this region is tremendously radiant. As an opposite reaction to this phenomenon, when the black hole devours materials, it constantly fires out super jets of plasma possibly from its poles.

However, it’s yet unclear if this anomaly behind the production of these plasma jets. Scientists speculate that the materials from the core circumference of the accretion disc are concentrated along the magnetic field lines of the black hole which play the role of a synchrotron to accelerate the materials as they get launched at extremely high velocities.

Miller-jones gave a hypothetical explanation that the disc of materials and the black hole could be possibly misaligned. Therefore, causing the innermost part of the disc to move unsteadily shooting out in different directions as the orientation changes.

The renowned scientist Albert Einstein had made a prediction known as frame-dragging in one of his many theories. In his theory of general relativity using the concept of precession which is the change in the rotational axis of a spinning body, he claimed that as a black hole spins and rotates its gravitational field is very intense to drag spacetime with it.

Experts: Fukushima Water is Too Dangerous to Dump Into The Sea