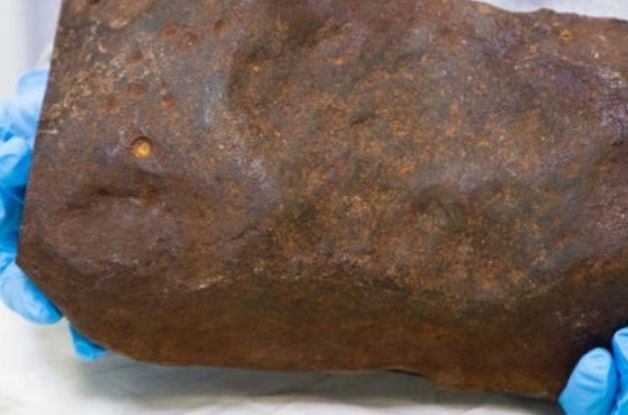 An Australian man holding on to a rock for a very long time in the hopes that it will one day be as valuable as Gold, only to find the item in question, was something far more valuable than even Gold.

The Aussie prospector by the name David Hole hunting for gold in Maryborough Regional Park near Melbourne discovered a strange form of rock which only looked valuable at the time. He was armed with a metal detector when he discovered a heavy, red rock residing in some yellow clay.

Hoping to find gold inside, he tried everything he could do to crack open the rock but despite his hard efforts, his mission failed terribly. After David had tried using all sorts of tools, he could lay his hands including a rock saw, an angle grinder, a drill, and even acid and yet still unable to open it, he decided to take it to the Melbourne museum for expert analysis.

According to Melbourne museum geologist Dermot Henry, David Hole was wrong to assume it was gold-containing rock, while in reality, it was an extremely rare meteorite that had a sculpted dimpled look. The odd look is formed when meteorites melt on the outside as they come through the atmosphere and the atmosphere sculpts them.

Meteorites are extremely very rare to come across, and Henry claimed that in 37 years of working at the museum and evaluating thousands of rocks, only two of the rocks offered have ever turned out to be real meteorites inclusive of this recent one brought forward by David.

Moreover, according to another Melbourne Museum geologist, Bill Birch commented that earth rocks are not as heavy as meteorites of similar sizes, so should one come across such peculiar rocks, they should forward them to the museums to be identified.

Scientists concerning the newly discovered meteorite have recently published a scientific paper. They have called it Maryborough after the town near its discovery site and they have further described it to be 4.6 billion years old.

The meteorite was a big rock that weighed 37.5 pounds (17 kilograms) when cut open with a diamond saw, and it was found to have a high percentage of iron, classifying the rock as an H5 chondrite, a common type of meteorite.

The researchers argue that Maryborough meteorite is much rarer than gold. It’s one of only 17 meteorites ever recorded in the Australian state of Victoria, and it’s the second-largest chondritic mass, after a huge 55-kilogram specimen identified in 2003.

Scientists claim that the Maryborough meteorite is much rarer than gold. It’s one of only 17 meteorites ever recorded in the Australian state of Victoria, and it’s the second-largest chondritic mass, after a huge 55-kilogram specimen which was identified in 2003.

Due To Unbearable Heat, Qatar Has Begun To Air- Condition The Outdoors

A Lost Continent Has Been Found Under Europe