More than 2000 homes have been destroyed in the massive fires, and at least 27 people have been killed. The colourful display featured images from photographers who have been capturing the fires that have been going on for months.

The message was a positive one and had a special focus on the moments of solidarity and hope that were captured on camera over the last three months. One of the images was a simple, hand-painted sign that had heart shapes and read “THANK YOU, FIRIES.” 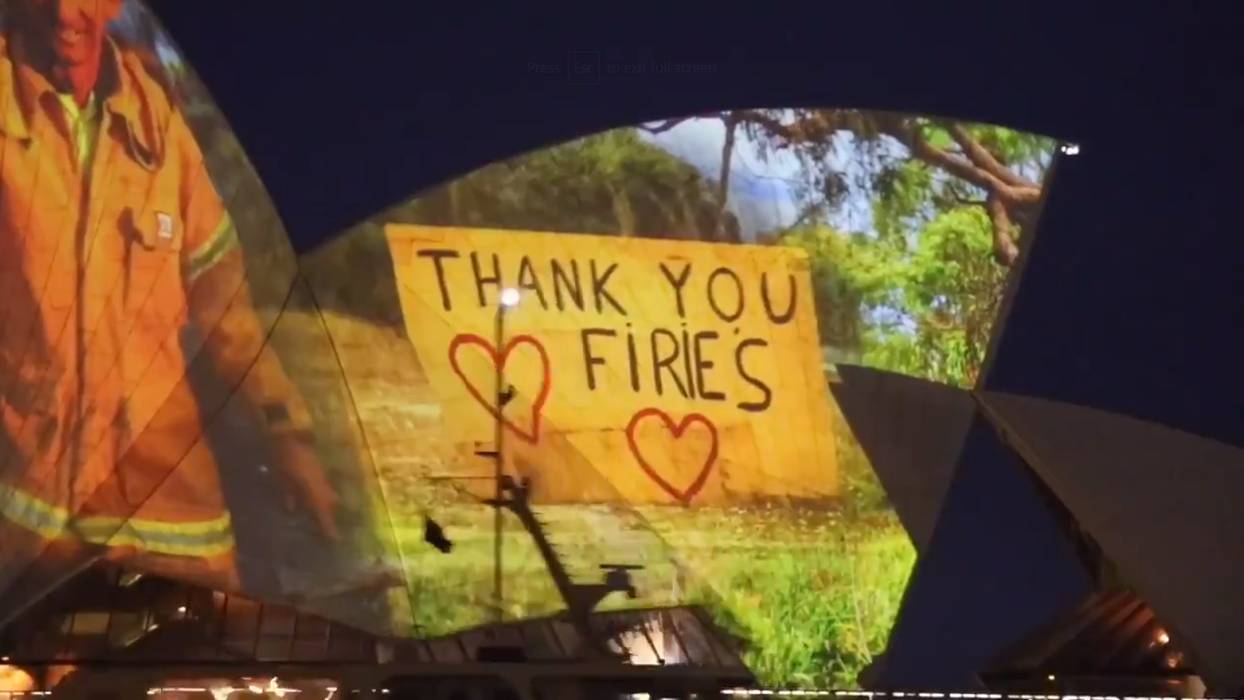 Opera House chief executive Louise Herron said those associated with the famous iconic venue wanted to express their sincere gratitude for the ongoing efforts volunteers and emergency services. He also added that the Opera House was hoping to inspire Australians during a difficult time.

Joel Creasey, Kitty Flanagan, Urzila Carlson and Tim Minchin are just some of the comedians that will appear at the gala performance. Proceeds from ticket sales will go towards the Australian Red Cross Disaster Relief and Recovery Fund, the NSW Rural Fire Service, Wildlife Victoria and WIRES.

The New South Wales Rural Fire Service shared a video of the illuminated sails on Facebook. The NSW RFS acknowledged the tribute and also shouted out to the many people, agencies and groups that are involved in the bush fire efforts. Even NSW premier Gladys Berejiklian used the occasion to express her thanks to the hundreds of volunteers across the state.

The venue joins a host of other famous Australians who are showing solidarity with bushfire victims and firefighters. A bushfire benefit concert was recently announced to take place on February 26th at Melbourne’s Sidney Myer Music Bowl.

A Fire and Climate Relief Concert will feature performances from Gang of Youths, Angus & Julia Stone and Tash Sultana among others. In a statement, the artists said that their hearts were with all Australians impacted by the devastating fires.

Thank The Ocean For Every Breath Of Oxygen