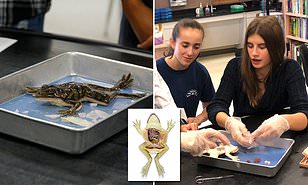 No croaking necessary! Florida high school becomes the first in the world to provide synthetic frogs for students to dissect in biology class, sparing the students the typical reactions of squeamishness and repulsion.

Students at the J.W Mitchell High School in New Port Richey tried out 100 models of the ‘SynFrog’ on November 20 – and not a single creature had to croak for the occasion. Dissecting animals in class can be the highlight of the semester for some students, while others may consider it cruel and somehow gross.

But for students at a Florida high school, the learning experience can now come without having to poke and prod a once living, breathing, and hopping animal. Hoping to make dead, formaldehyde-ridden frogs a thing of the past, the SynFrogs’ tissues are also made out of the water, fibre, and salts.

Developed by Tampa-based developer SynDaver, the hyper-realistic model frogs are designed to copy the visual and textural elements of a live female frog, featuring a skeleton, muscles, skin, organs, and even a reproductive system with eggs. The cost for each piece is $150. The SynFrog can be used over and over again, unlike the real frogs that are killed every year for dissection.

Dr. Christopher Sakezles, founder and CEO of SynDaver, claimed that synfrog is more like a live frog than the preserved specimens currently sold to schools for dissection labs. Furthermore, SynFrog not only looks and feels like a real frog but also physically safer to dissect than a real preserved frog because it doesn’t contain potentially harmful chemicals like formalin.

In addition to education, Sakezles said the SynFrog could also be used for surgical simulation and medical device testing. Pasco County superintendent of schools Kurt Browning expressed his delight at Mitchell High School’s commitment to ‘being a leader in innovation’ by becoming the first in the world to trial the SynFrog.

The animal rights group People for the Ethical Treatment of Animals (PETA) helped fund the research to develop the SynFrog. According to the organization, around 3 million frogs are killed each year for classroom use. Also, chemicals used to preserve them for educational purposes can be harmful – and many students are opposed to working with real animals for ethical and moral reasons.

“We’re proud to have found a partner in SynDaver to bring this revolutionary new educational tool to life, replacing the outdated use of once-living frogs forever,” Gala said. “We look forward to schools around the world adopting this state-of-the-art technology that will not only save millions of frogs but is a far more effective and safer teaching tool.”

Humans Are Breeding a World Full of Creatures That Cannot Survive

The EMC Effect: A mystery in every atom’s core