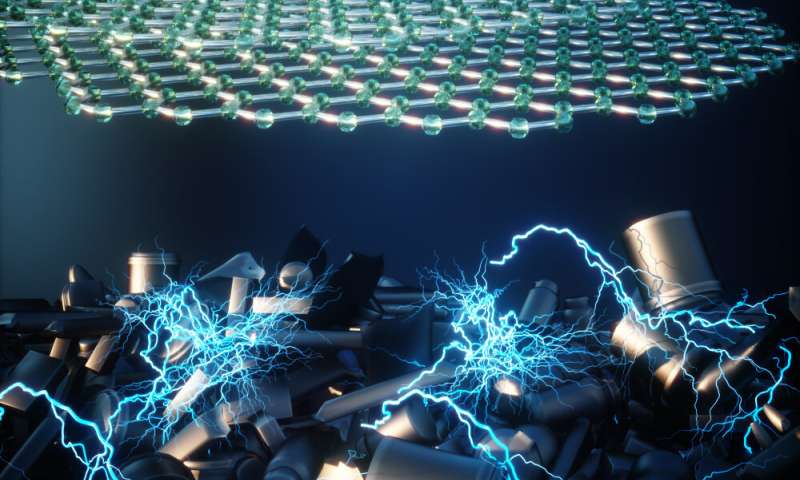 Scientists are using high-energy pulses of electricity to turn any source of carbon into turbostratic graphene in an instant. The process promises environmental benefits by turning waste into valuable graphene that can then strengthen concrete and other composite materials.

Graphene’s potential as a game-changing material is well understood, but the search is very much on for new and improved ways to produce it. Scientists at Rice University are reporting a big breakthrough in this area, demonstrating a new processing technique that can convert a wide range of trash products into “flash graphene” cheaply and efficiently.

That banana peel turned into graphene, can help facilitate a massive reduction of the environmental impact of concrete and other building materials. While you’re at it, toss in those plastic empties.

Researchers at Rice University reported on Jan 27th in Nature that they can zap virtually any source of solid carbon, from food scraps to old car tires, and turn it into graphene—sheets of carbon atoms prized for applications ranging from high-strength plastic to flexible electronics. Current techniques yield tiny quantities of picture-perfect graphene or up to tons of less prized graphene chunks; the new method already produces grams per day of near-pristine graphene in the lab, and researchers are now scaling it up to kilograms per day.

With high thermal and electrical conductivity, an ultra-thin profile, and incredible strength, graphene is already opening up some exciting possibilities in the world of material science. One of the main ways of producing the one-atom-thick sheets is through chemical vapor deposition, a process whereby a carbon source (typically methane) is pumped into a chamber to force a chemical reaction and leave a thin layer of graphene on the surface of a thin substrate.

This can be a laborious and expensive process, with the current commercial price of graphene ranging from US$67,000 to $200,000 per ton, according to Rice University chemist James Tour. He led a team of researchers in developing a new way of putting the wonder material together, which can use all manner of things like the carbon source to tackle environmental waste at the same time.

The process leverages what is known as flash Joule heating, in which an electrical current is passed through a conductive material to generate heat. Using this technology to heat any carbon-containing materials to around 3,000 Kelvin (around 4,940° F or 2,730° C) turns trash into graphene flakes in around ten milliseconds, while all the non-carbon elements that are leftover are turned into useful gases.

In the future, Tour says, there are endless uses for his new flash graphene process. It could even save the dying coal industry, he posits. By continuing to mine coal—but using it as a raw material in graphene creation, rather than simply burning it for energy—the industry can stay alive and convert its product into a higher value material.

Man Holds on Rock for Years, Wishing for Gold; Gets Priceless Meteorite