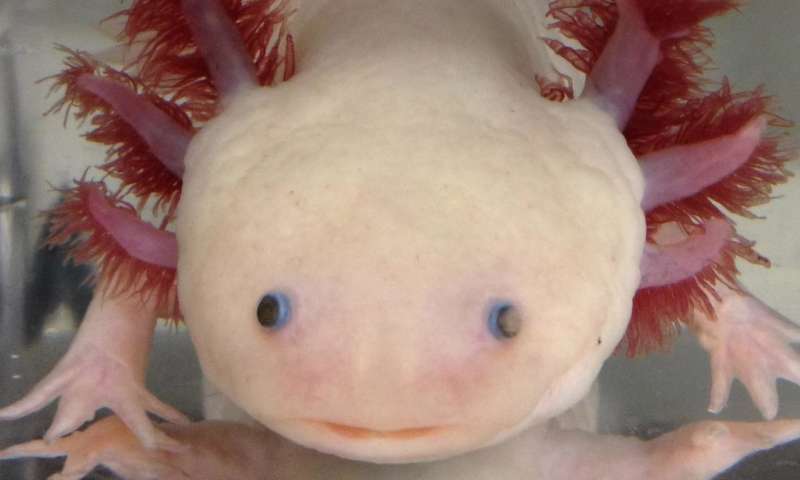 The type of salamander called axolotl, with its frilly gills and widely spaced eyes, looks like an alien and has other-worldly powers of regeneration. Unlike humans and other animals, axolotls don’t heal large wounds with the fibrous tissue that composes scars. Instead, they regrow their injured part.

Axolotls (Ambystoma mexicanum), sometimes known as Mexican walking fish, are not fish at all, but amphibians, ones gifted with an amazing trait that borders on being a superpower: the ability to regenerate entire body parts if they go missing.

“It regenerates almost anything after almost any injury that doesn’t kill it,” said Yale researcher Parker Flowers in a statement. This capability is remarkably robust, even for salamanders. Where regular salamanders are known to regrow lost limbs, axolotls have been observed regenerating ovaries, lung tissues, eyes, and even parts of the brain and spinal cord.

If scientists can find the genetic basis for the axolotl’s ability to regenerate, they might be able to find ways to restore damaged tissue in humans. But they have been thwarted in the attempt by another peculiarity of the axolotl — it has the largest genome of any animal yet sequenced, ten times larger than that of humans.

In a new study, Flowers and fellow researchers have been investigating the genetic basis for this wondrous capability – a mystery that has intrigued scientists for years, but which could potentially lead to radical treatments for human injuries and diseases, if we can only unravel how the axolotl does its thing.

Now, in the new work by Flowers and colleagues, the researchers have identified genes they say are involved in the axolotl’s tissue regeneration.

The advent of new sequencing technologies and gene-editing technology has allowed researchers to craft a list of hundreds of gene candidates that could be responsible for the regeneration of limbs. However, the huge size of the axolotl genome populated by vast areas of repeated stretches of DNA has made it difficult to investigate the function of those genes.

The team of scientists used gene editing techniques in a multi-step process to essentially create markers that could track 25 genes suspected of being involved in limb regeneration. The method allowed them to identify two genes in the blastema — a mass of dividing cells that form at the site of a severed limb — that were also responsible for partial regeneration of the axolotl tail.

According to Flower, many more such genes probably exist. Since humans possess similar genes, the researchers say, scientists may one day discover how to activate them to help speed wound repair or regenerate tissue.

Sadly, axolotl populations in the wild are on the verge of extinction in their native Mexican habitat, with a critically endangered status per the IUCN Red List, largely due to human causes.

A Biocompatible Magnetic Skin That Could Enable Remote Gesture Control

Giant Alpine Glacier Might Collapse Any Moment, And People Are Being Evacuated