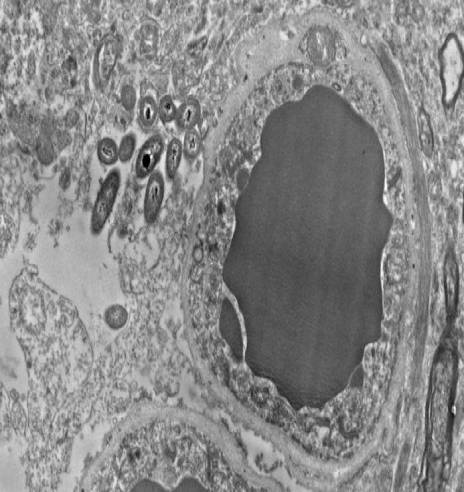 Historically, the brain has been considered to be a sterile environment. A selective filter called the blood-brain barrier is thought to prevent the diffusion of specific biological materials, such as toxic compounds and bacteria, from the blood to the brain.

Over the past decade, the gut microbiome and its effects on human health have become a topic of considerable interest in the scientific community and popular media.

Recently at the 2018 Society for Neuroscience conference in San Diego, a group of scientists from the University of Alabama in Birmingham presented data suggesting the presence of bacteria in the brain tissue of healthy people.

The team presented a poster that drew attention with high-resolution microscope images of bacteria penetrating and inhabiting the cells of healthy human brains.

Rosalinda Robert’s group usually studies the differences between the brains of recently deceased schizophrenia patients and healthy individuals. Separate from the goal of their investigations, they were surprised to find bacteria in the brains of both schizophrenia patients and healthy individuals. Interestingly, the majority of the bacteria were of three types commonly found in the gut.

The gut microbiome is composed of bacteria that naturally reside in the gastrointestinal (GI) tract, which affect various biological processes such as digestion, metabolism, regulation of the immune system, and protection against pathogens.

Fascinatingly, scientists have begun to uncover communication systems that exist between the GI tract and the central nervous system, termed the “gut-brain axis.” For example, gut bacteria can produce hormones and neurotransmitters that affect mood and behavior.

The work is preliminary, and its authors are careful to note that their tissue samples, collected from cadavers, could have been contaminated. But to many passersby in the exhibit hall of the 2018 convention, the possibility that bacteria could directly influence processes in the brain—including, perhaps, the course of neurological disease—was exhilarating.

However, the team acknowledged that it’s possible that bacteria in the air or on surgical tools could have been transferred to the brain during surgery. Alternatively, bacteria from the gut could have leaked through the blood-brain barrier after death but before the brain tissue was collected.

Further experimental data that are peer-reviewed by other scientists will ultimately determine if there is a brain microbiome. Suppose follow up studies rule out the possibility of postmortem contamination; this could lead to a paradigm shift for the fields of neuroscience and immunology. Bacteria in the brain could represent a previously unknown mechanism by which immune system activity within the brain is regulated.

US Supreme Court to Consider Limits on Contraception Coverage

SpaceX To Land Starship on The Moon Before 2022