NASA astronaut Christina Koch returned to the planet’s surface on Feb. 6 after spending a whopping 328 days on the ISS. Koch posted an adorable video of her reunion with her dog to Twitter on Thursday.

Christina has spent more consecutive days in space than any other woman, and her dog was not a big fan of that. When she finally made it home, her beloved pup, LBD (Little Brown Dog), couldn’t contain her excitement.

Not sure who was more excited. Glad she remembers me after a year! pic.twitter.com/sScVXHMHJn

Christina’s mission set a new record for the longest single spaceflight by a woman. She completed six spacewalks while on the International Space Station, including the first all-female spacewalk with astronaut Jessica Meir.

The video begins by showing LBD inside Koch’s home, on her hind legs with her front paws and face pressed up against a glass-paneled door. LBD seemed to see Koch through the door and couldn’t wait for her to get to the door, her tail wagging wildly behind her.

When Koch opens the door, LBD sprints out to greet her before Koch even has a chance to get inside. Koch walks into the house and kneels on the floor, snuggling with her giddy pup. LBD seems positively overwhelmed by the return of her human companion.

“To see your favorite animal is a symbol of coming back to the people and places you love,” Koch said about the gleeful reunion and her return to Earth in a news conference on Wednesday (Feb. 12).

Koch looks super excited to see her furry friend as well, and she gets down on the floor to try to hold the super-excited pup. But LBD looks like she’s beside herself — she can’t stop barking, jumping, or licking Koch’s face from the excitement.

This delightful interaction between human and pup was one of many incredible moments that Koch had after returning from almost a year in space — she broke the record for the longest single spaceflight by a woman. 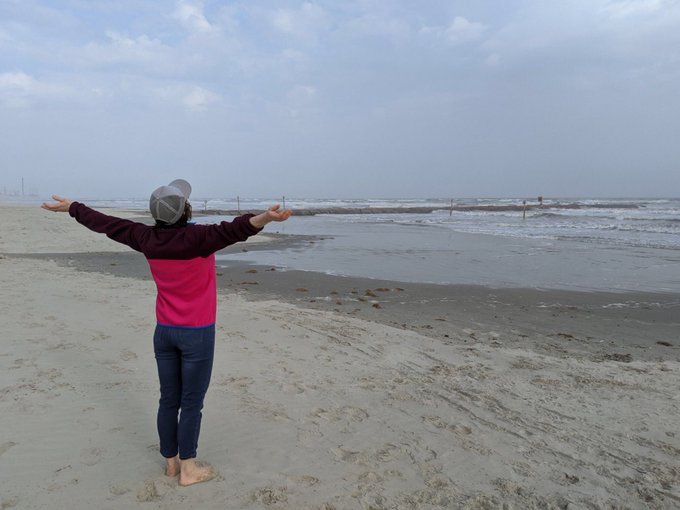 Koch’s delight is apparent in the photos of her immediately after landing in which she is beaming from ear to ear.

A surfer who has spoken about how much she loves living near the beach, Koch was quick to visit the ocean after reuniting with LBD and her husband, Robert Koch.

“And then there was this,” Koch wrote on Twitter next to a photo of her barefoot, toes in the sand, arms spread wide, thoroughly enjoying the beach.

Christina Koch returned to Earth last week on Thursday, landing in Kazakhstan, and LBD looks pretty happy to have her home.

Glyphosate does not cause cancer, reaffirms US EPA