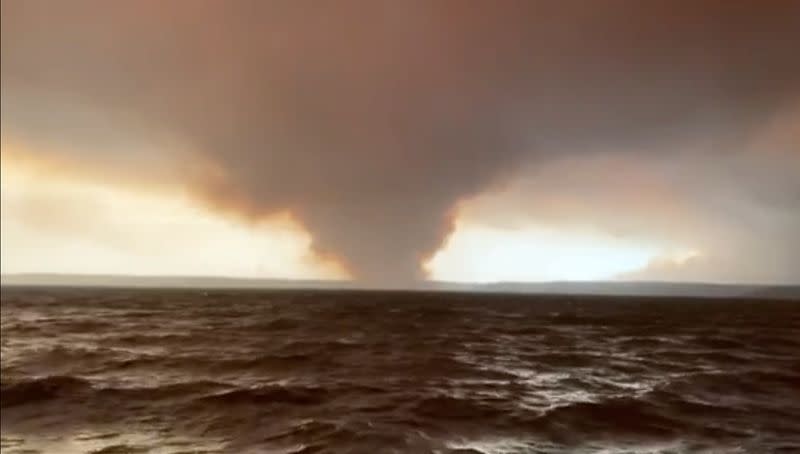 According to Australia’s Department of the Environment and Energy (DEE) over 17.1 million hectares of land have burned across the continent of Australia, with the worst fires currently raging in New South Wales and Victoria, states in the nation’s southeast. Adrian Meder, a marine campaigner at the Australian Marine Conservation Society (AMCS), claimed the fires left behind a huge number of charred plants and a massive amount of ash.

The heavy downpours already happening is facilitating the organic matter from the fires to rush into rivers and flow into coastal lakes, estuaries, and seagrass and seaweed beds.

The free-flowing silt will get into fish’s gills and block sunlight that seagrass and seaweed beds need for photosynthesis, effectively strangling them. “It’s essentially like putting a shade cloth all over the entire system,” says Leonardo Guida, a shark campaigner with AMCS.

Also, the slurry of potassium, phosphorus, and nitrogen will cause algae in the water to bloom. The algae will consume the oxygen in the water, suffocating species that rely on it.

The fires have also torched many forests near the coast, destroying plants that filter silt and excess nutrients. The ecosystems are adapted to the low nutrient flows from the land, Meder explains. But “these fires have effectively clear-felled areas on a scale that hasn’t been seen before.”

Scientists say that many commercial aquatic species, such as flathead, snapper, prawns, and various shellfish, begin their lives in coastal lakes and seagrass and seaweed beds. These coastal habitats are also spawning areas for species, including seahorses, and their degradation could send ripples throughout the larger ecosystem.

According to DEE, some of these effects are already being felt. In southern New South Wales and Victoria and on Kangaroo Island, the fires are causing problems for fisheries and aquaculture.

When the rain began in the Central Coast region of New South Wales, members of the Darkinjung, a local Aboriginal land council, set up barriers to keep the deluge of silt- and ash-filled water out of the region’s rivers, lakes, and estuaries. According to Kelvin Johnson, a senior land management officer with the Darkinjung, they have already seen some dead fish in nearby rivers.

The wildfires and their aftermath have caused and could continue to cause cultural damage as well, Johnson added.

Nevertheless, there has been no funding dedicated to marine and aquatic areas, Guida says. DEE notes that some of those funds may go to emergency interventions, such as erosion control, to stem sediment flows into aquatic ecosystems.

NASA Chief Says Pluto Still Deserves to Be a Planet

Woman Mistakes Wasabi For Avocado, Ends Up in Hospital With Heart Dysfunction