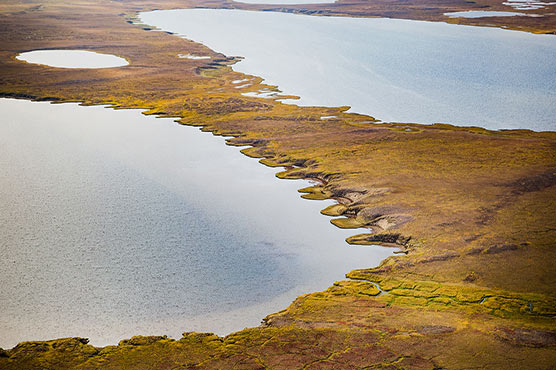 The Arctic is one of the fastest-warming places on the planet. As temperatures rise, the perpetually frozen layer of soil, called permafrost, begins to thaw, releasing methane and other greenhouse gases into the atmosphere.

For climate scientists, it is necessary to know how much methane and other gasses are being released and to what extent – as well as what other environmental factors may influence methane’s release.

In the remote northern Arctic, greenhouse gas emissions are slipping through the icy cracks. Flying over some of the most inaccessible parts of Alaska and northwestern Canada, NASA researchers have located a shocking amount of thawing permafrost – the frozen layer of soil that blankets much of the region.

If this tundra melts, it releases methane and other carbon emissions into the atmosphere, further accelerating global warming.

Today, we know the Arctic is warming twice as fast as any other place on Earth, but given how frigid and formidable landscape the landscape is, we still don’t know where the most methane is being emitted.

Scientists with NASA’s Arctic Boreal Vulnerability Experiment (ABoVE), using groundbreaking technologies, have documented the extent of methane emissions in the Arctic and published their findings on February 10, in the journal, Geophysical Research Letters.

The field mission took place in 2017. Using planes equipped with “AVIRIS-NG” infrared technology, the scientists documented methane hotspots, which the team defined as an area with 3,000 parts per million of methane in the air. In total, the scientists covered 20,000 square miles (30,000 square kilometres) of land and took roughly 1 billion observations.

The instrument did not disappoint, according to Science Daily. Lead author Clayton Elder of NASA’s Jet Propulsion Laboratory in Pasadena, California said, “And we detected 2 million of these hotspots over the land that we covered.”

While other airborne studies in the past have also noticed Arctic permafrost is melting faster than we thought, NASA researchers see this new technology as a breakthrough, giving us an entirely new perspective on the region.

In compiling the datasets, the scientists also discovered an interesting pattern to the hotspots. On average, the methane hotspots were mostly concentrated within about 44 yards (40 meters) of standing bodies of water, like lakes and streams.

Past the 44-yard marks, the presence of the hotspots began to drop off, and at about 330 yards (300 meters) from the water source, they dropped off almost completely. The researchers weren’t sure about the 44-yard “magic number,” and what significance it had, but further studies conducted on the ground have provided some answers, according to Gizmodo Earther.

This new knowledge will improve how Arctic land models represent methane dynamics and therefore, our ability to forecast the region’s impact on global climate and global climate change impacts on the Arctic.

Greta Thunberg Meets Justin Trudeau Amid Climate Strikes: ‘He Is Not Doing Enough’