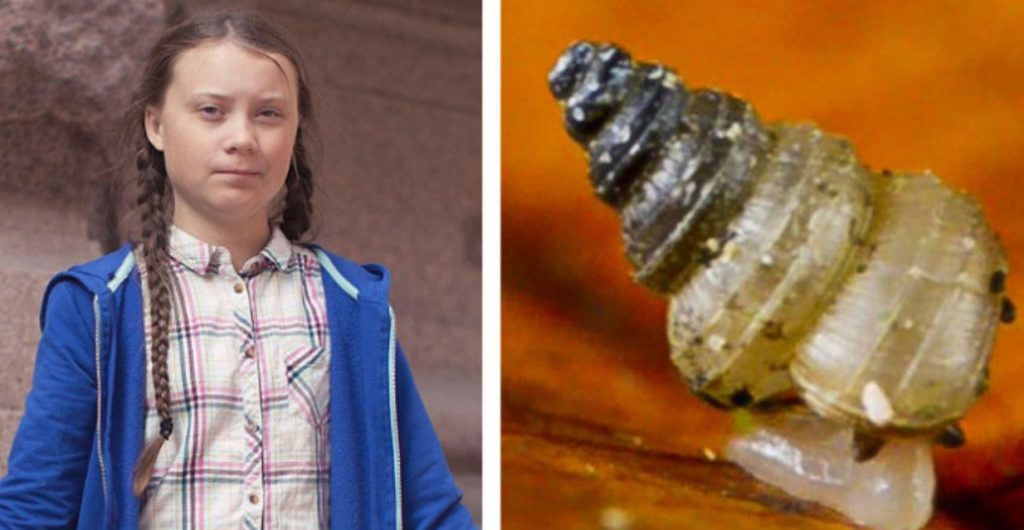 A team of scientists honored Greta Thunberg on her efforts by naming a newly discovered species of a snail after her. The Young Swedish climate activist has made a splash on the global scene as she works to raise awareness of the many devastating climate issues facing our planet.

Greta Thunberg has a good run. Not only was she named TIME’s 2019 Person of The Year, but she has also been nominated for a Nobel Peace Prize – and now she’s had a snail named after her.

The group of researchers and citizen researchers with Taxon Expeditions found the land snail, now named “Craspedotropis gretathunbergae,” during a research trip in Borneo. The team published a description of the snail in the Biodiversity Data Journal on Thursday.

They’re not just naming the animal after the activist for the sake of it either this species of land snail (and others like it) is likely to suffer as a result of climate change, famously Greta’s bête noire.

“The newly described snail belongs to the so-called caenogastropods, a group of land snails known to be sensitive to drought, temperature extremes, and forest degradation,” says snail expert and co-founder of Taxon Expeditions, Dr. Menno Schilthuizen. All individuals were found very close to the research field station (Kuala Belalong Field Studies Centre) at the foot of a steep hill-slope, next to a riverbank, while foraging at night on the green leaves of understorey plants.

The scientist said they approached the 17-year-old Swedish activist who said that she would be “delighted” to have this species named after her.

Citizen scientist J.P. Lim, who found the first individual of Greta Thunberg’s snail, says: “Naming this snail after Greta Thunberg is our way of acknowledging that her generation will be responsible for fixing problems that they did not create. And it’s a promise that people from all generations will join her to help.”

The study work including, fieldwork, morphological study, and classification of the identified specimen, was carried out in a field center with basic equipment and no internet access, the scientists said.

Nevertheless, this is not the first time that the Taxon Expeditions team names a species in honor of an environmental advocate. In 2018, they named a new species of beetle after the famous actor and climate activist Leonardo DiCaprio. Mr. DiCaprio temporarily changed his profile photo on Facebook to the photo of “his” beetle to acknowledge this honor.

A 6-year-old Has Raised Over $20,000 for Australian Bushfires by Making Clay Koalas

Hunter Becomes A Hero After Rescuing Koalas From The Deadly Bushfires