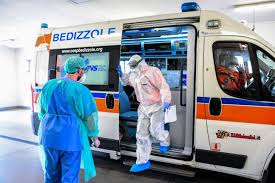 Italy’s death toll surpasses that of China following a massive rise of 427 in the last 24 hours to make it 3,405 while the total death worldwide nears 10,000. Some 3,245 people have died in China since the virus first emerged there late last year.

The persistent increase in Italy’s coronavirus deaths reflects the particular danger the respiratory disease poses for the aged people in a country that has the world’s second-oldest population after Japan.

Army lorries have been called in to remove corpses from an overwhelmed Italian crematorium as the country’s death toll from coronavirus overtook that of China. Medical professionals and health experts believe the total number of infections is significantly higher, with testing primarily limited to those arriving for hospital care.

According to the controversial latest official data, Italy’s death toll from the coronavirus epidemic appears to have overtaken that in China amid questions on whether China is giving the actual death numbers. In Chinese, fatalities fall sharply, and Europe becomes the epicenter of a pandemic that is killing thousands and devastating the global economy.

The total number of infections in Italy has also risen to more than 41,035 from a previous 35,713, while cases in Germany, Iran, and Spain rose to more than 15,000 each. Incidents in the US also surged past 13,000, while the number of deaths hit 200, forcing the state of California to order a statewide lockdown.

According to Boris Johnson, it would take the UK about 12 weeks to defeat the coronavirus as European governments are struggling to contain the virus. Boris added that the success in defeating the disease would be achieved if and only if people agree to follow strict new rules.

As of Thursday, the numerous majority of people who have died in Italy of about 87 percent are the elderly older than 70 years old. Italy, with its population of 60 million people, has now recorded about 150 more deaths than China, which has a population of more than 1 billion.

A lockdown imposed on 12 March in Italy has been extended beyond the original 25 March end date. Nearly all Italians have been told to stay at home while the Chinese government has used draconian lockdowns to control its outbreak and stop the spread of Covid-19 disease.

Italy has been criticized for failing to quarantine themselves and take national lockdown measures seriously properly. This follows the continuous rise of the number of new cases and deaths despite their measures.

NASA Targeting Human Moon Landing In Second Half of 2024